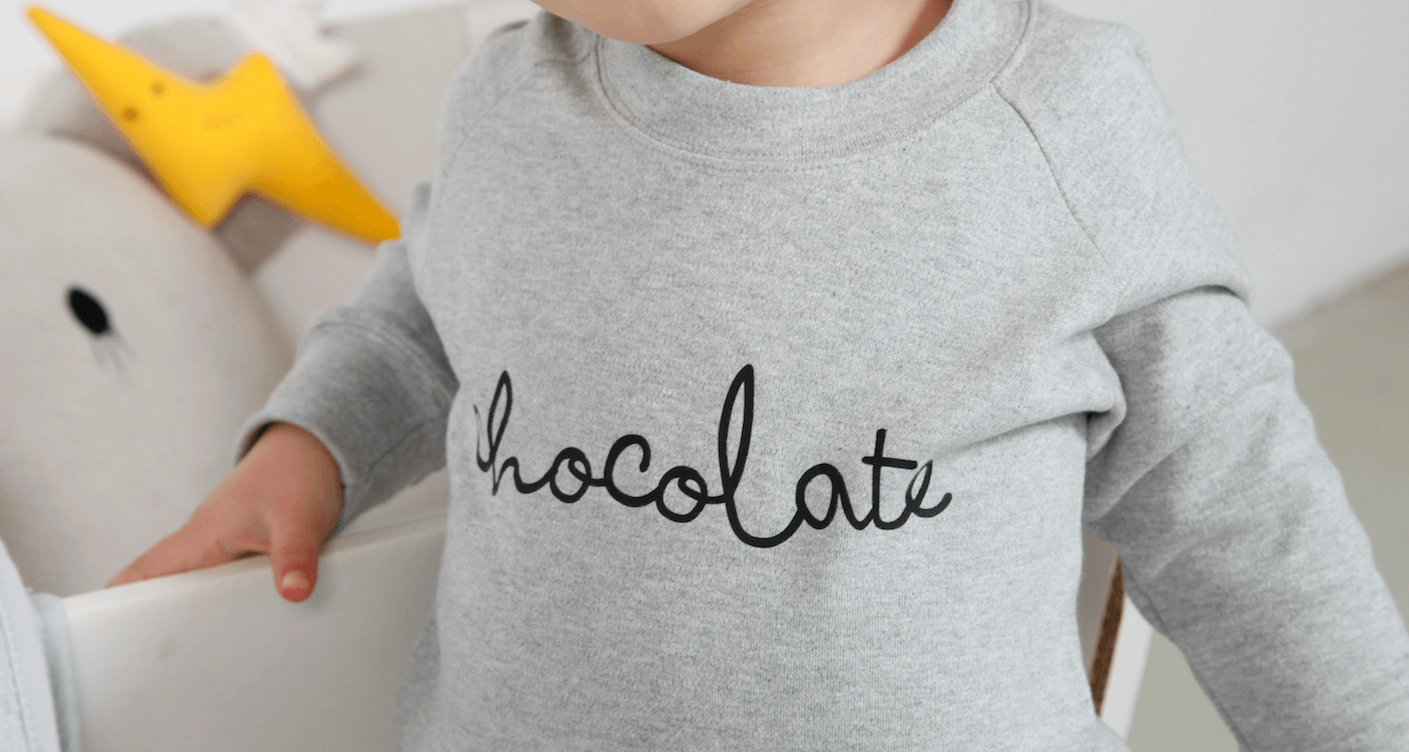 What started as a trend is here to stay. Gender neutral clothes or unisex if you prefer. Gone are the days when skirts were just for women and trousers were just for men. Gender no longer dictates the way people dress.

Fashion designers are combining men’s and women’s collections on the runway, many shops do not have girls and boys sections anymore. They do have a fashion section now. No more confinement to specific colours and styles. More and more fashion brands are launching gender-neutral collections. And one of them is the new UK based label Totem Kids.

We spoke with founder Kate Bonhote to find out more about the new way of dressing our children. And ourselves.
Because one thing is for sure: Gender neutral clothing does not force someone into a box. It allows for self-expression! 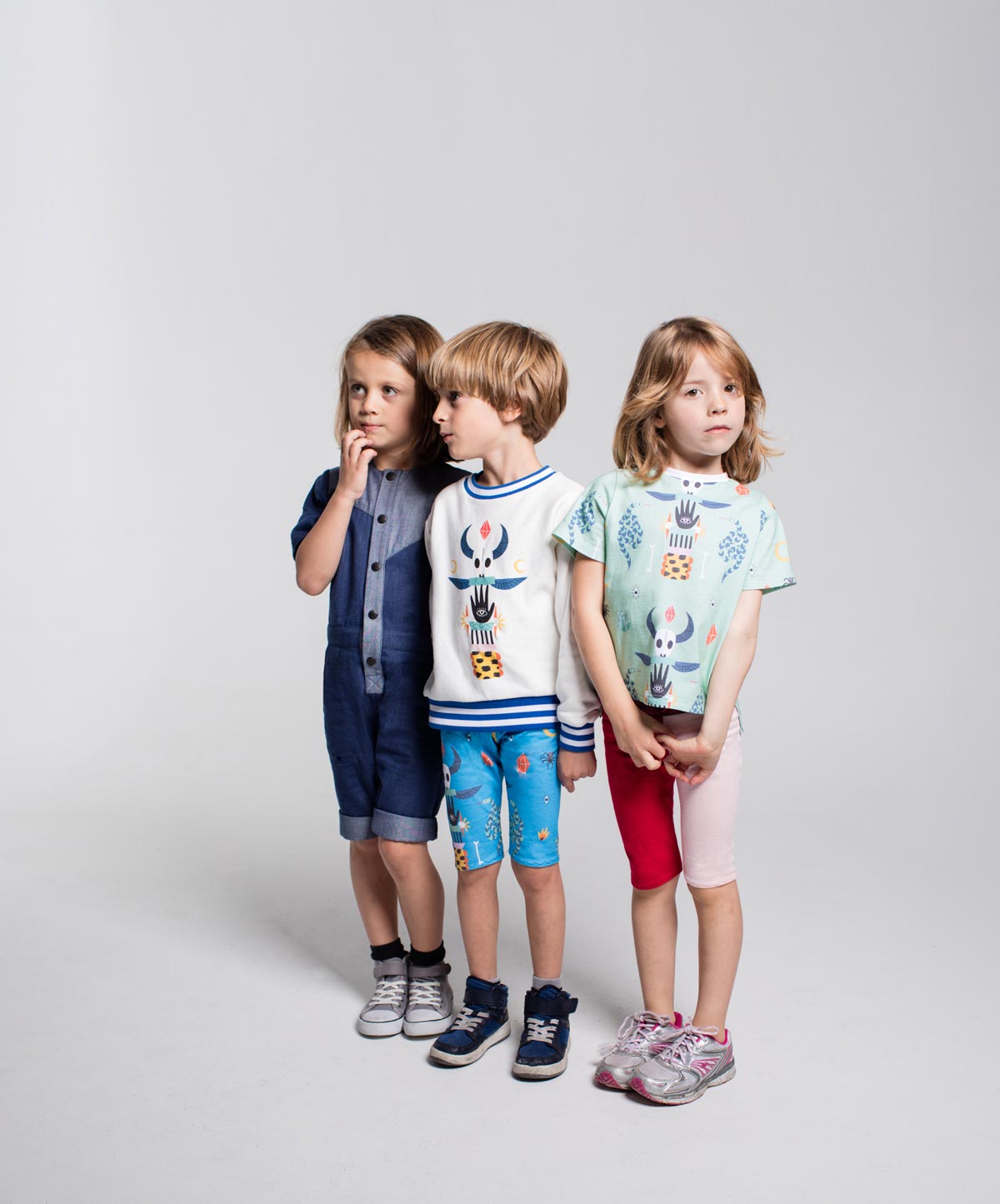 Kate Bonhote is a fashion designer who lives in Stoke Newington Hackney. Together with her film director husband Ian, and their two children Phoenix and Quinn.
We choose to live here because there are plenty of other like minded creatives with families, good schools and lovely parks. Plus urban Dalston is in walking distance so we feel we have the best of both worlds.

Kate graduated with a first in designs from Central St. Martins and did lots of work experience with various big name fashion houses. Which left her disillusioned with the fashion industry.
Loving her craft but not the industry. Kate decided to set up a design community with a retail store in Soho called Beyond the Valley that she ran with 2 other creatives. The idea was to provide a platform to showcase new designers, enable collaboration and creativity. It proved hugely successful. Along with their women wear brand by the same name. Kate ran this happily for a decade until she had children. And decided to take time out of work, enjoy family life and travel. The family lived in Mexico for a year and that is where Totem was born. 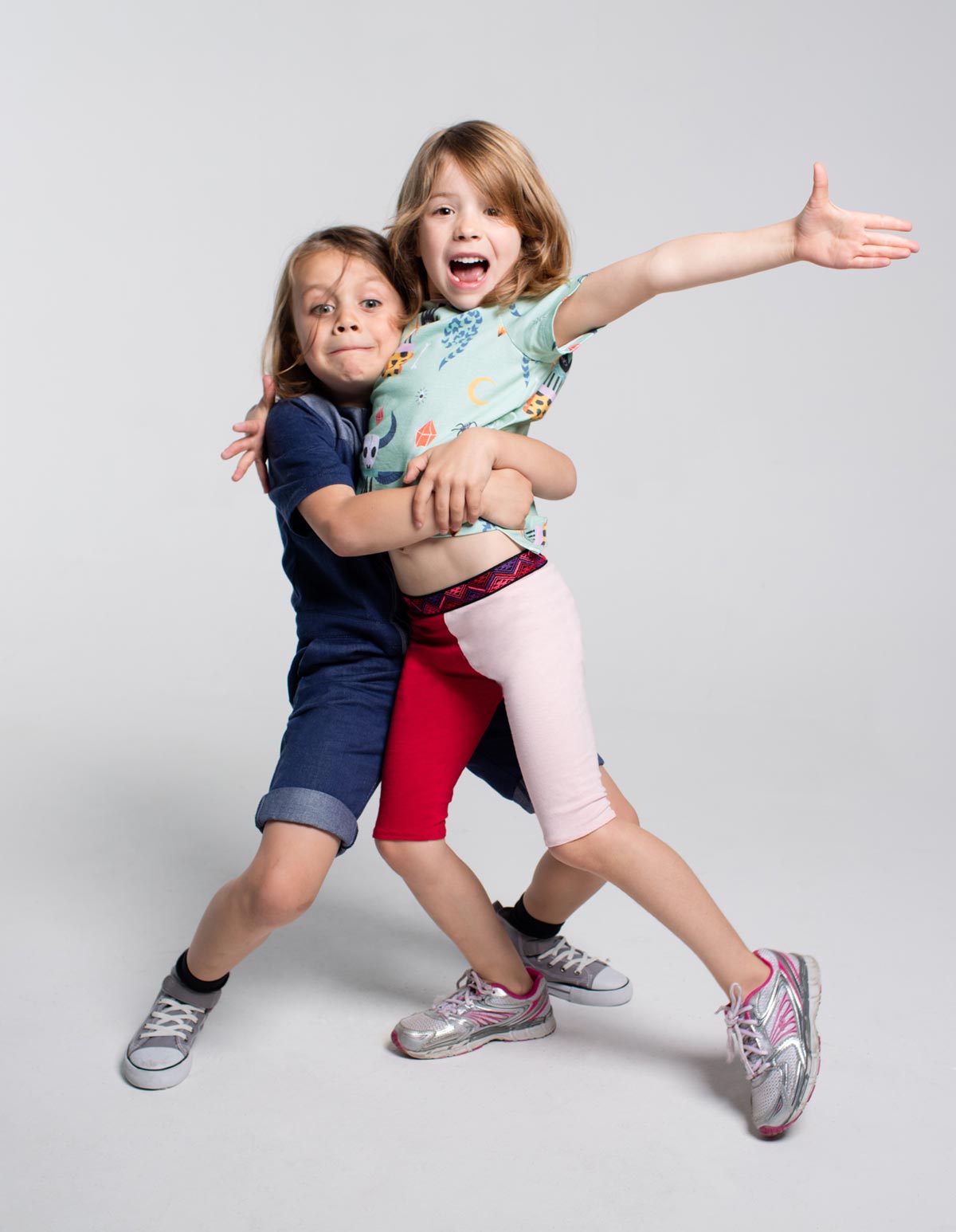 A new creative challenge that fits around her family life. And it allows her to continue collaborating with other artists. Knowing the environmental impact the production of collections has and being a parent that cares about the future, it was important to find an ecological way for her new project. And the choice to be gender neutral was a natural one.

I have always viewed my children as individuals. My parents allowed me and my siblings to choose what we wore growing up. I was a very girly girl whilst my younger sister wore boy clothes as that was better to climb trees in. We were allowed to be who we wanted to be.

Luna chatted with Kate about gender neutral clothes for kids:

Luna: What does ‘gender neutral or unisex clothing’ really mean?

Kate: It means to me as a designer simply not designing specifically for a girl or a boy in mind. I am focusing also on the functional rather then the decorative. So I don’t include dresses or skirts in my collection as they aren’t the most practical for a child to play in, they seem more ornamental to me. That’s not to say they are wrong, I love getting dressed up myself and before I went through this process I was a very feminine women wear designer, ruffles and drama. But I feel that there are many decorative clothes out there and I wanted to fulfill another brief, one that as a parent I am more personally interested in. Totem naturally being very personal.

Let’s say a girl or woman puts on men’s clothes – is that gender neutral?

Its a lot easier for girls to dress in boy clothes, women in men’s. I think the other way around there are many more taboos. I find men’s clothing more practical, I often borrow from my husband. It happens much less the other way around, possibly because historically women’s clothes are more restrictive or designed to show off the body’s form. In the 40s during the war, women put on men’s clothes to work in the factories – that was the first move towards that trend.
Gender neutral clothes currently are just not obviously either, but they do tend to lean more towards male shapes. Although I have always loved my boys in leggings, and they are very practical garments. Dresses/ skirts aren’t great for doing hand stands in.
Colour boundaries now are more and more being broken down – for my first collection I wanted to use blues and pinks to have some ironic fun.

Image: Tobias and the Bear 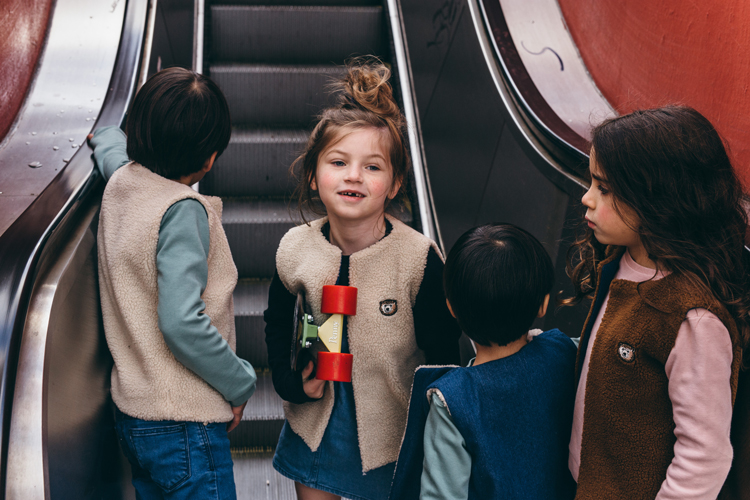 I have learned a lot more about gender neutrality through transgender, non binary friends and its a complex issue. I think its important to know that there is a difference in dressing to express style then to express your gender. Everything does and should exist. I think children struggling with gender issues should absolutely be acknowledged with gender neutral clothing being on offer as an equal to gendered ones. Also to break down taboos and address stereotyping.

If there would be only unisex clothes, would children miss pieces to match their identity?
Whether strictly gendered or not?

TOUGH QUESTION!
I think if we really broke down all gender boundaries then all clothes would be unisex in any shape or form because they wouldn’t be assigned to one sex. It would be more about style, then gender. Or clothes performing a function. I don’t see why babies need gendered clothes for example. But as a creative person I can’t support anything being strict, I feel inclined to have more option rather then less.

Parents do not want to be confined to specific colours and styles, depending on whether shopping for a boy or a girl. Everyone can wear what they like. Is that the future of fashion?

I really hope so, as well as continued freedom from the pressure of fashion trends. The future of gender neutral in fashion is hopefully a growth towards more open mindedness and further freedom of expression.
I tried to not follow any gender rules when dressing my sons before they could pick out their own clothes. I used to mainly buy from the girl’s section for my sons because that was more variety of colour. I also hated boy graphics – cars/ trucks it just felt very per-ordained on what their interests would be. Starting school definitely affected their choices and you have less ability to protect them from outside pressures. Having said that, they have great unusual style and are very authoritative in how they like clothes to feel and perform. My only objection is for branded clothes – I don’t think anyone should be a walking billboard but apart from that they have complete reign.

Do you feel that it is easier to introduce gender neutral clothing in the kids world than for adults?

I think its one and the same. Adults are all powerful in their children’s lives, so you have to break down barriers from top bottom. I think its a natural start though, children tend to be our most powerful teachers. Especially when we stop to listen them.
I agree that it is for me the biggest freedom designing kids wear – as adults we grow even more individual with our shapes. Children also don’t have tight fitting clothes traditionally so they have freedom to move, as well as it being acceptable to have more give in places to allow for growth.
In terms of gender neutrality as a function for a designer that is definitely a natural factor to have less differences between the 2 sexes. I purposely put all the buttons on the right side because the old fashioned reasons make no sense, especially for children. There is really no reason to have differences, its about taste and style – as long as child can experiment freely they can develop their style and a sense of fun/ enjoyment with what they wear.

About Totem Kids:
A new gender neutral kids wear brand that collaborates with different illustrators each season. For S/S 2018 with Ruby Taylor. Totem Kids is based in the UK. 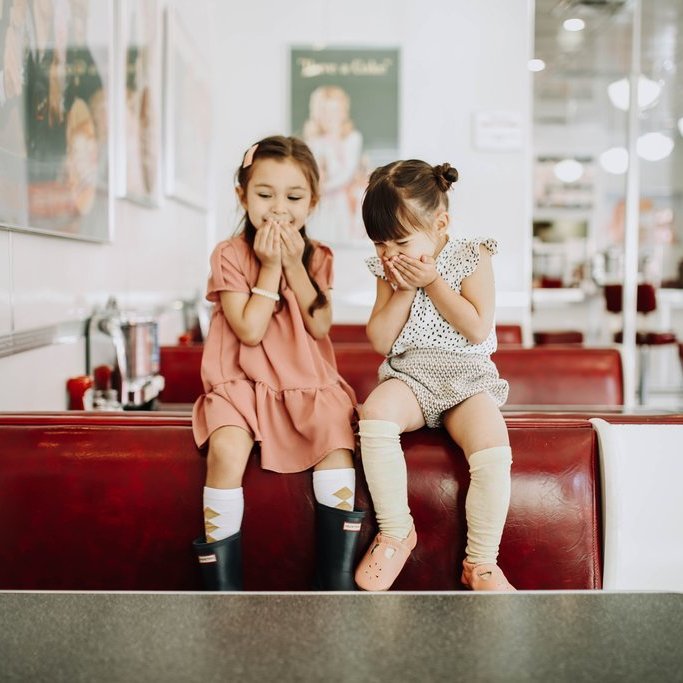 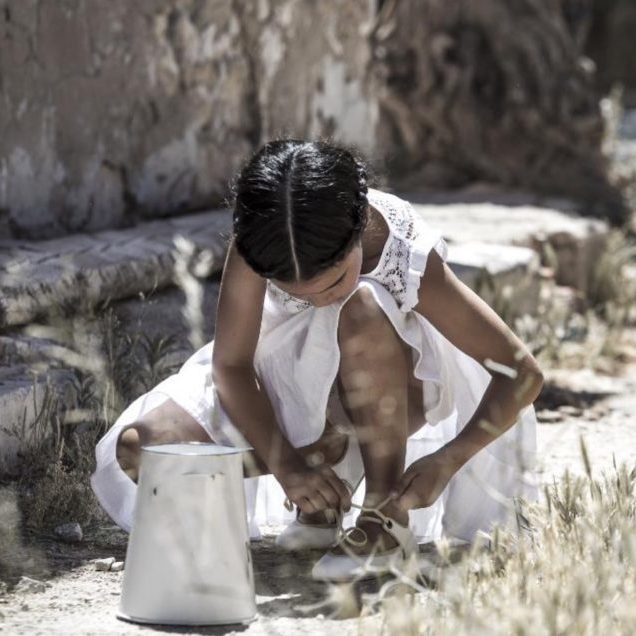 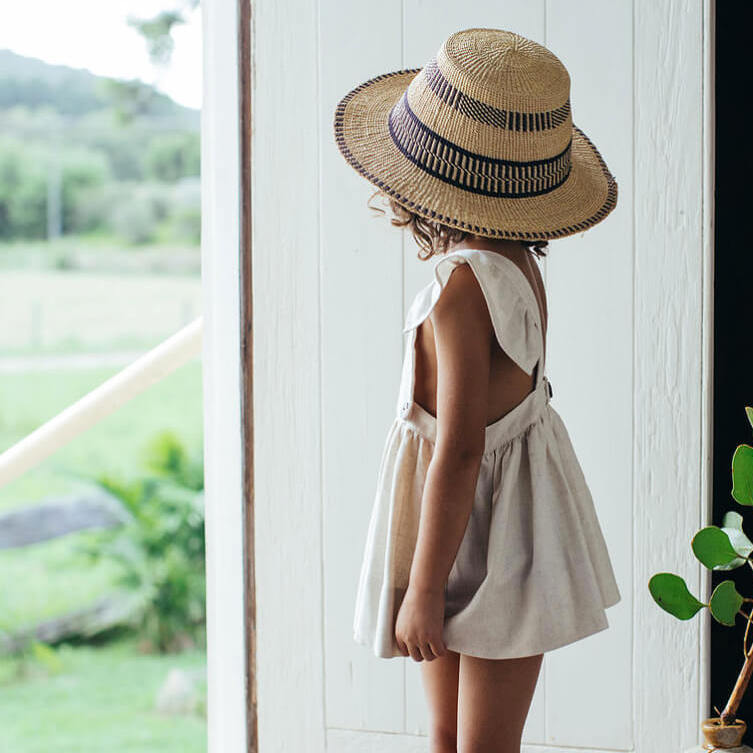